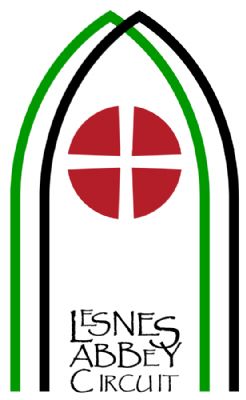 The Abbey Window reminds us of the monks from Lesnes Abbey who originally served our area. The Methodist Orb is like a round central window often seen in an arched window, representing a channel for God's light to our Circuit.

The window is made up of two parts: a green part representing the Lesnes Abbey grounds and other green places in our Circuit and the black part representing the built environment - housing and commerce. The fact that there are two combined windows also reminds us of our origin as two merged circuits.

The wording "Lesnes Abbey Circuit" below the 'window' appears hand-crafted and reminds us that it is practical work in which we are engaged. It looks
rather like an altar, or a communion
table, beneath the East window in an
Abbey, again reminding us that our
Circuit is a potential meeting place
between the earthly and the holy.